David London's Magic Outside The Box

at AllWays Lounge
This event has passed.

Join David London on a journey to someplace else.

Combining magic with storytelling, comedy, surrealism, philosophy, and that which cannot be defined, Magic Outside The Box is a magic show unlike anything you have experienced before. Prepare for an evening packed full of laughs, mystery, and the unexpected!

About David London: David discovered that he was a magician at the age of seven, and has since spent over 20 years trying to figure out just what that means. He has created five original theatrical magic productions includin Cerebral Sorcery, ...Art of Dreams and The Adventure to the Imagi Nation, and authored eight manuscripts related to magic and illusion, including Daydreams, Borderland State, and Imagining the Imagination. He regularly performs his unique style of magic at theaters, museums, galleries, festivals, and private events, and has presented his shows, workshops and lectures throughout the United States.

For more information on David and his magic, please visit www.DavidLondonMagic.com 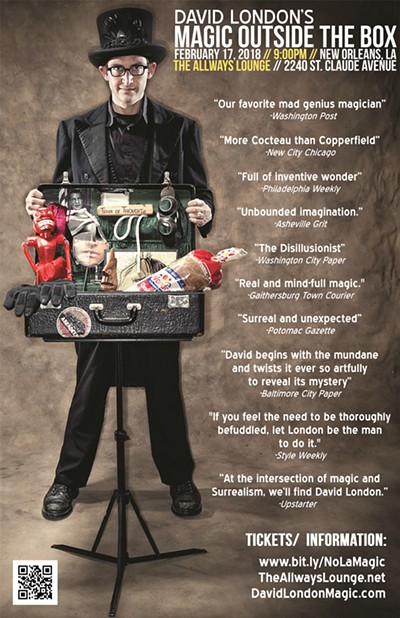